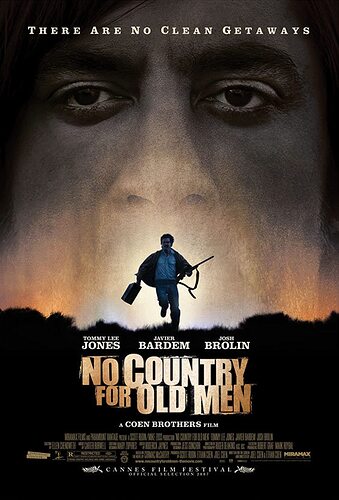 this movie is OKAY

heavy stuff in film is that which makes you reflect on your life … i would consider “no country for old men” to be LIGHT viewing even compared to something like “10 things i hate about you” which is a retarded high school prom comedy !

but that sort of thing is subjective. for example there wasn’t a single drop of blood in “10 things i hate about you” whereas in “no country for old men” there are decomposing corpses, broken limbs with bones sticking out, people operating on themselves inside a motel and so on … so maybe you will think this movie is “cool”

Critics were in love with No Country though…which is why I watched it.
It was better than I expected.

It was good…Brolin and Bardem nailed their roles. I’d give it 3.5 - 4 stars…it was well executed…and I would give Sicario 4 stars.
Sicario was better directed…more energy…better flow and pacing.

Think of something you would cook at home but done by a Michelin star chef…whereas Aniara, Dogville etc. use ingredients only a chef would have.

Critics have to keep in mind who the movie is for.

for example if you’re a Critic and you’re reviewing a Marvel Superhero movie you can’t criticize it for being childish because it’s literally a movie for kids.

But there are no children on this website here so i would take points off for childishness if i could be bothered to review a Marvel movie.

No Country and Sicario are rated high because they are great by the standards of the type of movies that they are. Nobody is going to compare No Country or Sicario to Aniara or Anna Karenina just like nobody would compare Beer to Wine.

I would agree that to drink Champagne and eat Lobster every day would be degeneracy. There are settings where Beer, Pizza, Hot Dogs or Ice Cream are more appropriate.

my position is it’s OK to enjoy Junk Food occasionally and that doesn’t mean you have poor taste or will ruin your health … so long as you understand that it is in fact junk food.

to me No Country and Sicario are some of the best junk food around. but it’s still junk food. nothing wrong with enjoying it but i have to point out what it is.

the execution is top notch but i would rather have bad steak than perfect fries.

the purpose of a star rating ( 1 to 5 stars ) is to save the reader time. it is frankly not very helpful. but a proper review could get so long and give away so much of the plot that at that point it might be better to just watch the movie without reading the review. so reviews will always be a compromise.