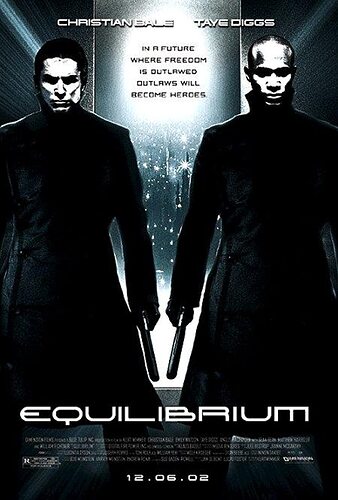 Equilibrium: Directed by Kurt Wimmer. With Christian Bale, Dominic Purcell, Sean Bean, Christian Kahrmann. In an oppressive future where all forms of feeling are illegal, a man in charge of enforcing the law rises to overthrow the system and state.

Feeling is a privilege for the elite…who can control themselves.
The masses must take their libria and keep their feelings down.
The masses are shown as consisting of different races and sexes but always numb, grey and lifeless.

At least the Matrix showed people waking up, and they had to be taken over by the agents to do dirty work…but in Equilibrium regular people just don’t matter.

Here there is no real awakening. Bale always had feelings, and his kids woke up when mommy died. Taye Diggs had feelings but he was a sadist and wanted to keep killing and hurting.

in the actual society we live in, instead of numbing people with drugs we numb them with meaningless entertainment.

the obsession of Americans with “fun” and “social life” and other nonsense is fairly striking if you come from a different society.