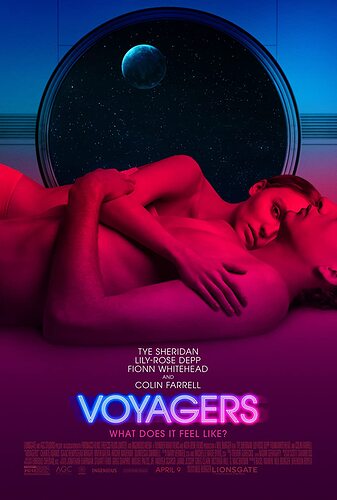 Voyagers: Directed by Neil Burger. With Tye Sheridan, Lily-Rose Depp, Fionn Whitehead, Chanté Adams. A crew of astronauts on a multi-generational mission descend into paranoia and madness, not knowing what is real or not.

To be honest, with that poster, I expected a lot of sex.
But as you said it’s an American film.

The problem with the film is that it doesn’t go all the way in anything…not the plot, characters, relationships, violence…or resolving the issues.
You gotta push the knife…all the way in. The director backs off

That being said, what is the film about?
It’s the fall of man in the garden of Eden.
Not taking the blue stuff - eating the fruit and opening their eyes - the fall.
The garden = the ship.

The messed-up family dynamic is there; Zac kills father (Colin Farrell’s character, our Adam) and blames it on the “ghost”. Zac (Cain) later tries to kill Christoper (Abel).

Zac is a fine politician: he promises provision, protection (from the “ghost”) and order (but with breaks for party time), and sexes a bunch of chicks (implied in a very brief scene when his crew wakes him up).

Eventually, Abel (Christopher in the film) kills Cain (Zac), and the mission succeeds. And it ends.

But I think there is more.
The blue stuff was hurting the plants through the human excreta.
And they needed the plants for life.
So the blue training wheels had to go at some point.

What is the point? The fall was necessary for the kids to grow up, mature, and make the mission theirs, to follow through to the end. That is the real reason father comes on the ship: to help protect them against the fallout of their own fallible nature.

All their genetic engineering, super-smarts, indoctrination, fitness regimens, duties etc. couldn’t stop their animal natures from arising. They had to overcome themselves - something their forebears couldn’t do - and start anew.

More stuff: blacks = sex & violence (black chick in the sex scenes & black guy helps Zac kill father), the Asians are bright but timid, and the whites drive the film.
Surprised Hollywood let that pass (the director did have another black chick as the voice of reason so I guess that is how it got out).

i dunno bro … she literally was called “a genetic defect with pus filled face” and then shot dead.

good analysis overall. i didn’t make the connection to garden of Eden, but you’re right.

this basically explains where power comes from - hint - not from voting !

“The Art of War” has something to that effect … namely that you have to win first, and fight only after victory has been secured … though it wasn’t written about democracy i think we can apply it to democracy … in other words you have to win power first ( through force and cunning and / or money ), and then you can have election to legitimize it …

i didn’t make the connection to garden of Eden, but you’re right.

i think there is a lot going on in that movie.

he is exhibiting basically all the characteristics of real government - lying, manipulation, rape and murder …

appealing to the senses of crew accomplishes absolutely nothing …

this basically explains where power comes from - hint - not from voting !

Aah…! Brilliant…I missed it. After killing the opposition…who else will take charge?

i dunno bro … she literally was called “a genetic defect with pus filled face” and then shot dead.

Yeah…but that was said by the evil evil villain…

he is exhibiting basically all the characteristics of real government - lying, manipulation, rape and murder …