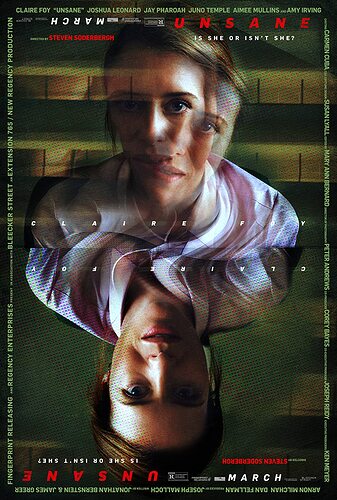 Unsane: Directed by Steven Soderbergh. With Joshua Leonard, Claire Foy, Sarah Stiles, Marc Kudisch. A young woman is involuntarily committed to a mental institution, where she is confronted by her greatest fear - but is it real or a product of her...

I didn’t like the cliche ending…
Obviously she would now be a bit unhinged, and I wish the director had ended it differently.

No mental hospital would be that loose in its operation. Soderbergh could have taken less theatrical license with that.

would you really put anything past the medical industry after the Covid Plandemic / Scamdemic ? in my estimate 90% of all medical procedures i had in my life were unnecessary. the ONLY medical care i received which i’m glad i did was following accidents when i needed a cast on my broken arm and so on. aside from getting put back together following accidents all my other interactions with doctors and hospitals were net negative for my health - that is i would have been better off if i never went there.

The whole idea that one’s grip on reality is not as firm as we think it is was good.

yes but that wasn’t a new concept. apparently the term “gaslighting” actually originated from a 1944 movie called “gaslight” in which a husband was trying to convince his perfectly sane wife that she was insane. 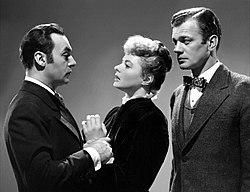 Gaslighting is a colloquialism, loosely defined as making someone question their own reality. The expression, which derives from the title of the 1944 film Gaslight, became popular in the mid-2010s. The term may also be used to describe a person (a "gaslighter") who presents a false narrative to another group or person, thereby leading them to doubt their perceptions and become misled, disoriented or distressed. Oftentimes this is for the gaslighter's own benefit. Normally, this dynamic is pos...

I loved what was done with the other mental chick. There is a serious element of Nietzsche’s dicta about staring into the abyss and being careful fighting monsters. Those scenes were awesome.

you’re right. i think one of the highlights of this film is characters aren’t black and white. the villain stalker for example is also the most loving and vulnerable character and the poor little victim girl is also the most vicious, vindictive and cunning predator.

in real life of course i find that most people actually ARE cardboard cutouts and are simply stupid and evil but i don’t want to watch movies about people like that - they should be turned into soap not have movies made about them.

your typical hollywood movie is the opposite of reality - most people in hollywood movies are good and smart not to mention they are black, female or gay.

Her being more decisive and analytical as shown before the cliche ending was good.

her incel wannabe boyfriend showed his weakness by speaking about his feelings which changed the dynamic by making her realize that this relationship was no different from any other namely that as a good looking woman she is the one who gets to be the abuser. prior to that she was just focusing on his physical superiority which made her feel that the solution is to run. but when there was nowhere to run anymore she realized that it was him who should have been running.

aside from the sort of fluid nature of power dynamics in the movie and the great acting the other thing i liked is just how it was shot. all the camera angles are really weird and the colors are weird too.

now that i think of it conventional camera angles essentially imply that the observer is a person present at the scene because the camera is usually where another person in the room would have their head … but why is that 3rd person there ? it makes more sense to have camera angles random since there is no 3rd person.

in fact this film was shot on an iPhone:

this is why the black bars are on left and right instead of top and bottom.

such a compact “camera system” is probably what also enabled the weird shots as it’s hard to get a gigantic camera into weird spaces inside small rooms. a small camera can be used in REAL small rooms instead of building a gigantic set with a part of a small room built inside of it. shooting in a real room instead of a fake one automatically makes things more authentic.

ultimately this film is just genuinely different in a number of ways which is important if you want your work to be considered art plus the chick is pretty, acting is good and nobody knows what is going on, nobody knows who is the good guy, whether their feelings make any sense or if they can trust their own mind.

this is in contrast to your typical Hollywood Trash like Spiderman or whatever where you have the good guys and the bad guys and they run around and shoot at each other like retards and then then the good guys win against all odds every single time. week after week. year after year. same exact scenario forever with different superhero names and different superpowers.

in “Unsane” our girl wins as well of course … but is she the good girl ? the ending shows that she isn’t. we defeat the monster by becoming one.

the incel neckbeard falls in love with a precious little innocent girl who becomes a monster and kills him and then proceeds to devour everything around her.

of course she always had that side in her … but she was suppressing it because she felt powerless and had to play the victim … but eventually when the conditions are right the beast comes out.

her dumb bitch mother, her incel neckbeard wannabe boyfriend, her stupid, fat ugly coworker and so on …

she washed them all off like taking a nice shower …

The last minute…when she was about to kill the abuser lookalike.

Oh you moved it to spoilers…I tried for a spoiler free review…didn’t work.

yes but that wasn’t a new concept. apparently the term “gaslighting” actually originated from a 1944 movie called “gaslight” in which a husband was trying to convince his perfectly sane wife that she was insane.

Aahh…but here’s a modern twist…she feels that way after he alters her meds.

she washed them all off like taking a nice shower …

that’s what i’m thinking as well.