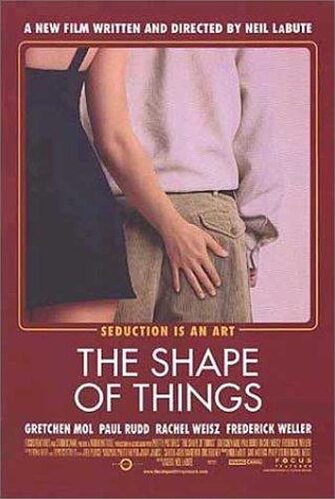 The Shape of Things: Directed by Neil LaBute. With Gretchen Mol, Paul Rudd, Rachel Weisz, Frederick Weller. A quiet, unassuming man begins to change in a major way as a result of meeting a new, art-student girlfriend, and his friends are unsettled by...

the problem with this movie is two fold

the million dollar question as always is - should @marlon watch it ? the answer is i don’t know. i appreciate what they were trying to do with this film but i’m not sure they quite pulled it off.

i watched it because of young Rachel Weisz ( 12 years before “Lobster” ) and in some ways the movie was a letdown ( no nudity ) yet in others it exceeded my expectations ( the brutal twist ending ! )

i would say this movie is fairly safe to watch with your family though it’s intended more for younger people like college age.

midway through the movie i started to get a feeling i knew how it was going to end and i only kept watching to confirm that i guessed right … well, i wasn’t even close LOL

i just wish it was better done …