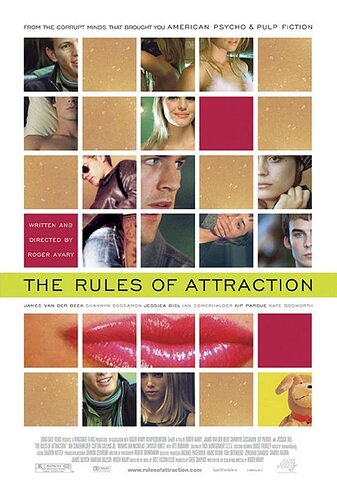 The Rules of Attraction: Directed by Roger Avary. With James Van Der Beek, Shannyn Sossamon, Jessica Biel, Kip Pardue. The incredibly spoiled and overprivileged students of Camden College are a backdrop for an unusual love triangle between a drug...

the movie was trying to be edgy, cool and sexy but it was trying so hard and doing such a poor job at it that it was just disgusting to watch and i only lasted a few minutes before turning it off.

it felt like the director was a virgin pretending to be casanova who got his idea of what sex, relationships and parties are from watching other bad movies made by virgin neckbeard jews with 3 inch pricks.

they cast a bunch of beauties for the movie but had no idea what to do with them.

of course there is always a possibility that it got better after the first 10 minutes but i guess we’ll never know.

typical jew garbage like a feature film version of 2 and a half men.