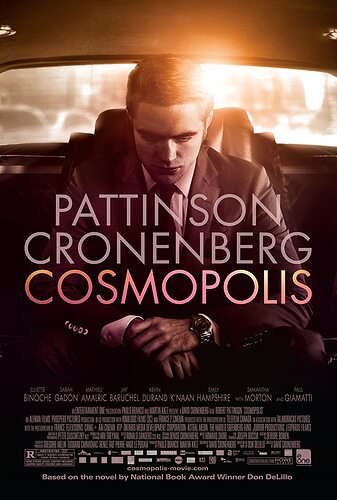 Cosmopolis: Directed by David Cronenberg. With Robert Pattinson, Sarah Gadon, Paul Giamatti, Kevin Durand. Riding across Manhattan in a stretch limo in order to get a haircut, a 28-year-old billionaire asset manager's day devolves into an odyssey...

i thought this analysis was interesting: of course the movie is very hard to pin down exactly.

Pattinson plays a cold detached billionaire who is so jaded he’d destroy himself to feel something. (An interesting movie would see him descending to Epstein Island, like his other billionaire friends, screwing teens and eating fresh baby flesh to regain his desire to live).

Through him, we explore the exciting topic of capitalism!

It is based on a book…the characters utter reams of dialogue, clearly unaltered from the book, in looong takes while servicing Pattinson in the limo.

The film feels distant when watching it…much like the young billionaire watching the world convulse through his bulletproof glass.
Around minute 50, (if you make it that far!), there is a semi-human conversation between Pattinson and the wife (who has lovely blue eyes, which the camera crew do not frame properly) about…who cares…

This is Pattinson’s Batman audition, and he is good.
He journeys in his stretch limo, part home, crib, and office, while tackling death (his rapper friend), philosophy (his chief of theory), marriage and divorce, religion, drugs, music and sex…while going to his self-inflicted doom.

He is a currency trader who bets on the Yuan dropping. Instead it goes up, impoverishing him. The end of the film gives a pseudo-smart explanation via poor Paul Giamatti, who did his best with…let’s face it…atrocious dialogue…but since the film is saying “I love what capitalism does to things (the stretch limo) but hate what it does to people”, let’s look at that.

He fails to break the Yuan because the Chinese gov’t manipulates it to serve their interests. He knows this yet still tries…this self-destructive urge shows that capitalism also contains this same self-destructive urge because even though it provides evermore efficiently for our needs, it destroys our lives to get there.

And that’s the message of the film. So the cosmopolitan billionaire, the world-citizen (cosmo-polis) is destroying others and himself in the service of capitalism. Yay class! Have a cookie…baked by minimum wage workers!

The movie sucks…too many ideas…not properly treated…empty verbose speeches…tastes like so cold stale pizza…I didn’t like it. Found it a slog, a bore…even the sex scenes just made it bearable.

You need Von Trier (Dogville) to direct this.
I think Cronenberg watched that and thought he could do it…but he couldn’t.

Its a film actors do to say I’ve done a Cronenberg, and for Pattinson to show he could carry a mainstream film, after slogging away for years in post-Twilight indies.

so do you think my review ( quoted above ) was off base ?

but you should have kept in mind that i actually add extra stars for lack of action !

i kind of feel like suffocating on GAB … it’s all the same fucking Blacks, Jews, Illegals, Vaccines, Trannies, Guns, Abortion - same shit OVER AND OVER. none of it is intellectually stimulating in any way.

i miss debating whether Tesla stock will go up or down, or Apple stock or whatever - anything that can be at least somewhat intellectually stimulating.

I have been spoiled by Dogville.
After that, when a director makes a parable I judge it by that measure.

I can appreciate zero emotion acting, e.g. Sacred Deer, Lobster, but they went somewhere…this one just trailed off like a punch drunk fighter…much like the limo…just looking for a place to rest after a hard day.

I saw the usual director tricks…full suit at the start, then no jacket, then no tie, then shirt out and cake splattered to show him falling apart…but it felt too distant for me.

It felt much like watching it through a pane of that bulletproof limo glass…just too distant…a demigod falling from grace…the film references Icarus…but we don’t experience the heights…just the jadedness, the been there done that feel. If those appeal to a viewer, then the film is a great success…to them.

I didn’t mind the ending but long before that…I just wanted it to end.
Give the same material to director more suited to it…and a bit more subtle with the capitalism bad, products of capitalism good.

I’m surprised you are managing to stay there…
What of Parler? Is it any good?

I’m surprised you are managing to stay there…
What of Parler? Is it any good?

never been on Parler. stopped using GETTR because it was just MAGA boomers.

i want to go back on Twitter but technology is getting too smart. they won’t let me back without my phone number and then they will know i’m the same person who used that phone number on the last half dozen accounts.

they reject google voice phone numbers and will probably reject most other fake ones too.

i could still make it back there if i ONLY talk about investing and nothing else … but as soon as i talk about ANYTHING else like health, fitness, women, politics etc - i will get wiped. this would be complete torture to avoid talking about pretty much all subjects.

kind of like the whole pandemic and lockdown is just torture.

I have been spoiled by Dogville.

True…as a faithful depiction of the book, I think it is a great success. The dialogue is clearly lifted from the book, and the distance we feel is deliberate but…it just wasn’t my cup of tea.

it just wasn’t my cup of tea.

i was a little surprised you wanted to see it in the first place.

i did say that i “recommend” it but i didn’t say it was a must watch or a masterpiece or a classic or anything like that.

just a collection of random meditations in the setting of NYC traffic which is where i wasted quite a bit of my life, maybe why i could relate to the movie.

actually there was a lot in the movie i could relate to for various reasons and i like all Cronenberg movies ( both father and son ), but none of them are real masterpieces, just good.

well “good” for my taste.

you are allowed to have a taste of your own

i guess the reasons for my high 4 star rating and “recommendation” are:

1 - having spent 20+ years in NYC it’s something i could relate to, from spending up to 5 hours a day in traffic just to get to gym and back to my best friend from high school being a Currency Trader …

my reviews will always be biased, that’s why MovieLens exists …

True.
But then I wouldn’t have seen Dogville or Aniara or Tirza so it’s worth it.