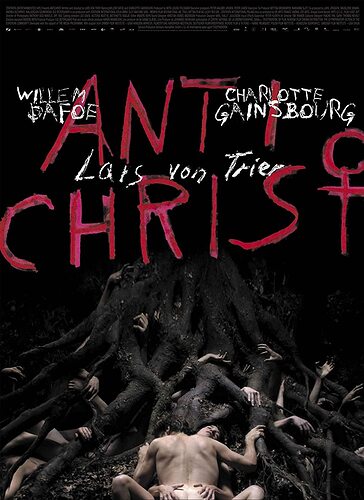 Antichrist: Directed by Lars von Trier. With Willem Dafoe, Charlotte Gainsbourg, Storm Acheche Sahlstrøm. A grieving couple retreat to their cabin in the woods, hoping to repair their broken hearts and troubled marriage, but nature takes its course...

A. horror. film.
Full-blown straight up horror…
Took two days to watch…very…hard…to watch.
Not seeing that again. The actors are brilliant.

There are levels to interpreting this mental and visual and spiritual assault…I am not even claiming to have scratched the surface. I am not sure what the surface is…or was.

On one level…a detached arrogant therapist commits two cardinal errors…sexing the patient and treating someone you love. She, on the other hand is losing her mind, and eventually drags him down into the whirling insanity.

It is logic vs emotion, man vs. woman, with the man winning the battle but losing the war. The therapist but breaks his rule, once, twice, thrice…the third sex scene after the loss of the child…in the woods, hitting her, being the evil man, playing into her madness…he is lost in her world…and he never leaves. In the epilogue, it shows he is fully in tune with “nature”…chaos reigns…

We can look at this from the aspect of inversion.
Antichrist means opposition to Christ, and instead of Christ.
Eden = garden of God. Adam and Eve were cast out for failing…no more f
Here, Eden = garden of Satan. The Adversary seeks their destruction. Adam and Eve should flee this garden. They don’t flee. They are destroyed.

More inversion. Eve is to bear the child of promise, the one who will crush the Adversary. Here she contributes to her son’s death. Her son is Nic…short for Nicholas. This means conquer the people, or victory over the nations etc.
Destroying Nic destroys their marriage and their lives.
They lose… everything…
'Abraham was told to sacrifice his son, Isaac, a type of Christ, but at the crucial moment, he was shown a ram, which was sacrificed instead. There is no substitute…one of them has to go. And there is no escape from this garden… he merges with the chaos and overcomes his fear - losing her - in the worst way imaginable. The therapist undergoes therapy, and accepts his place in the garden. She also “accepts” her place in the garden too.

Again, genius acting by the pair.
The characters do great and terrible harm to each other.
The scene with him dragging the weight reminds one of Kidman dragging her weight…both sacrificial lambs.

The truth…I am doing all this analysis to distance myself from the film…it presents the world and people not merely as flawed…but inherently evil and self-destructive. The scene where he…does her at the tree…and what she does to him. The justifications…the lies they tell themselves and each other…

From the start he blames her for the child’s death so why is he analysing her? What does he want? When he discovers the thesis of her madness…why doesn’t he leave?

Why does she buy into the intrinsic evil of women? Then she abuses the baby with the shoes…and weighs him down with a grindstone.

But then, this film isn’t about the answers, it’s about the questions it raises.

i think i will need to watch it again before making any comments as it has been a year since i saw it.

this film isn’t about the answers, it’s about the questions it raises.

for me the goal is to understand the following:

Americans think in terms of things like " getting ahead " … what does that mean ? having a bigger bank account than somebody else puts you " ahead " of them ? does that mean life is a linear scale from rich to poor ? that billions of years of evolution was all about making money - when Federal Reserve is only 100 years old ? and already we are moving into an age of Austerity, Technocracy and “Equity” ( Communism )

my best ideas always come to me in the following settings:

why ? because those are the places where i am not distracted.

it is only in bed, on the toilet and in the shower where we have a chance to actually think … but we will typically use that chance to think about whatever was already on our mind at the time …

PS: your analysis seems to often be heavy on the biblical stuff. are you religious ? or do you simply have good memory ? i never read the bible but if i did i certainly would have forgotten what i read within a few months.

Religious? Yes.
But this director, Von Trier, has a strong religious background.
Dogville and Antichrist are steeped in biblical and occult imagery.

If you are analysing people or culture, from a purely secular view, you make Gone Baby or Kajillionaire.
If you want to add a little more detail, you make the names spell out the movie plot like Ex Machina.

But Dogville and Antichrist go big…good vs. evil, failure (sin), judgement, scapegoats…and use the bible to frame the film/novel chapter by chapter.

Dogville is as you said…reject the grace of God receive the judgement of God.
Antichrist inverts everything…it is Gnostic…creation and its cycles are evil…look into them too closely and you go mad…basically the film is saying Satan created the world or has made it marred and grotesque.

I didn’t touch on the witches and the imagery of the fox, crow and the constellations because I am not familiar with them, and didn’t think it worthwhile to dig them up…maybe I should have…

I did dig up stuff for the Deer movie though as the legend was integral to understanding it better.

Had fun fishing in the seas of Gab?
Found anything?
Found anyone?

does that mean life is a linear scale from rich to poor ?

My son knows a man who plays video games and streams it to YouTube.
He used to work in customs and was letting stuff through.
While he was making money, everybody loved him. They knew what he was doing but it was okay.
When he got caught, and came out of prison, they all shunned him.

Moral of the story: don’t get caught
Or as 50 cent put it: get rich or die trying.

my best ideas always come to me in the following settings:

Yes…so true…imagine if you had kids…especially when they are little!! You would go crazy. 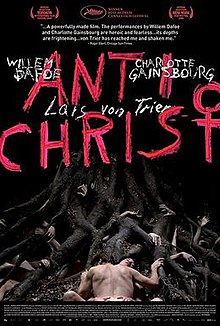 Antichrist (stylized as ANTICHRIS♀) is a 2009 experimental psychological horror film written and directed by Lars von Trier and starring Willem Dafoe and Charlotte Gainsbourg. It tells the story of a couple who, after the accidental death of their son, retreat to a cabin in the woods where the man experiences strange visions and the woman manifests increasingly violent sexual behavior and sadomasochism. The narrative is divided into a prologue, four chapters and an epilogue. Written in 2006 wh...

the crow (symbol of despair), the deer (symbol of grief), and the fox (symbol of pain), referred to as the Three Beggars.

Would you act in such a film? I am thinking of the demands on the actors…the nudity, the scenes…I respect them both…Dafoe and Gainsbourg did an amazing job. There is acting…like what Affleck does…and there is this stuff…what Dafoe and Gainsbourg and Irons and Kidman do…

It seems wrong to use one word – acting to cover such a wide level of performances. Just as how we use love to cover everything from “I love ice-cream” to “I love to disembowel animals” to “I love my family”.

on second thought i won’t re-watch Antichrist or analyze it.

don’t want to make a fool out of myself.

for me it was obviously just about sadism / nihilism / family dysfunction because that’s what i can relate to but you’re right there are more layers and since i’m not versed in those things ( the Bible ) i won’t be able to decipher them anyway so i won’t bother trying.

basically i’m into the subversive / nihilistic / sexually depraved / sadistic side of Von Trier movies … the religious parts are lost on me.

i can summarize the entire GAB in a few lines without any issue:

Would you act in such a film?

Von Trier said he dared Dafoe to do the movie by saying “your wife thinks you won’t do it” and things like that LOL. Also in the credits it says that Dafoe and Gainsbourg weren’t having sex in any of the scenes it was all body doubles etc. Just like they used body doubles in Lolita for a different reason.

It seems wrong to use one word – acting to cover such a wide level of performances. Just as how we use love to cover everything from “I love ice-cream” to “I love to disembowel animals” to “I love my family”.

on second thought i won’t re-watch Antichrist or analyze it.

don’t want to make a fool out of myself.

Disagree. You won’t make a fool of yourself.
If you don’t want to re-watch it…fine…
I certainly won’t…the main characters really tear into each other…
but I am interested in what you would say.

I’ve got American Psycho, The Lives of Others and Drive to watch.

She is a special one…

Disagree. You won’t make a fool of yourself.
If you don’t want to re-watch it…fine…

I’ve got American Psycho, The Lives of Others and Drive to watch.

Drive ( 2011 ) ? My mother liked it because she likes all movies with Gosling. I don’t personally plan to watch it, but you like action so …

I don’t personally plan to watch it, but you like action so …

Got to have a little dessert…not just heavy food…