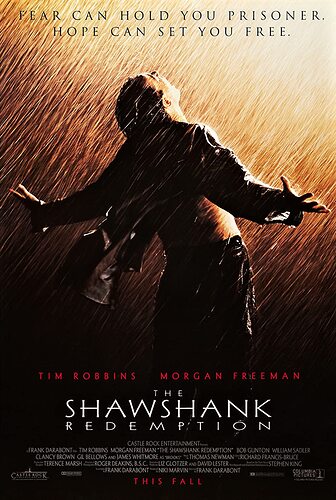 this movie is over-rated but i won’t go so far as to say i was disappointed - i wasn’t.

it just simply wasn’t the movie i thought it was going to be.

i thought it would be some deep stuff, instead it was just a good movie, but it’s really meant for an average person.

“The Shawshank Redemption” is probably what an average person’s idea of a deep movie is, and even that only up to about the last 30 minutes where it turns into just a run of the mill Hollywood.

so basically it tries to be deep for the first 2 hours and even then it only succeeds by the standards of an average person and then it just plain stops trying and just goes for a Hollywood style ending.

but it isn’t bad. it’s just less deep and more cheesy than i thought it would be.

the story is actually really good, it’s just that i wasn’t looking for a story - i was looking for some deep philosophical reflection - instead i got a good story.

to reiterate - “The Shawshank Redemption” is an average man’s idea of what a great movie is.

To a superior intellectual like myself it is barely better than “Top Gun Maverick” … only about 50% better.

“The Ballad of Jack and Rose” i saw a few days ago was WAY more serious of a movie, no comparison at all. But it was also more boring as well. “The Shawshank Redemption” is really a basic bitch movie masquerading as some profound shit. But it’s a good basic bitch movie at least.

I could probably compare “The Shawshank Redemption” to “The Notebook” ( 2004 ) as both being CHEESY AS FUCK while pretending to be something more, except that Notebook is about Love and Shawshank is about friendship …

actually the movie is surprisingly free of the typical White = Bad, Black = Good hollywood messaging, instead it takes a more colorblind approach … probably typical of the era in which it was made before Hollyweird went full Anti-White … it’s just cheesy and predictable ( despite some plot twist )

I watched it. I agree that it is a good film but not a great one.
Cheesy? I wouldn’t say that.
The friendship works…but it does go Hollywood in the closing act.

It is based on Stephen King story…one of the stories King did without kid sex (IT and other stories). 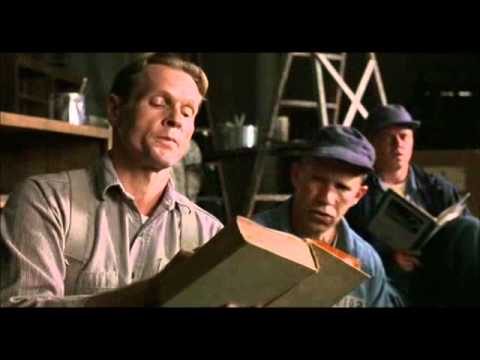 Main differences between Shawshank and Count:

instead of Dantes being a Sailor, Andy is a Banker

focus moves from revenge to Friendship

story told from perspective of a friend, not Andy himself

i’m sorry i gave away half the movie but i feel like maybe i had to otherwise you would feel ripped off when you watched it and realized, like i did, that you just saw the same movie twice …

i blame Stephen King for fucking everything up. it’s a lose-lose situation for me. if i tell you about the similarity i spoil the movie, if i don’t tell you - you’re walking into a trap. i also don’t know whether to tell you in review or analysis or comparison - it’s a complete clusterfuck.

I’ve watched both films so nothing to spoil…

The Count of Monte Cristo is probably most noteworthy for Jim Caviezel (star of the Passion of Christ) and Superman star (Henry Cavill) - then very young.

The book, though I haven’t read it, is probably better than the film, as you would delve more into character motivations and thought processes.

I’ve watched both films so nothing to spoil…

The book, though I haven’t read it, is probably better than the film, as you would delve more into character motivations and thought processes.

i liked the first half when shit kept getting worse, then the whole “revenge” part was too hollywood for my taste and by then i made the connection with Shawshank and it was too predictable to enjoy at that point …

sexy boi, but i’m not gay, just a tranny pedophile …

Jim Caviezel (star of the Passion of Christ)

haven’t watched it, wasn’t planning to either unless somebody can give me a compelling reason to … i mean i dig how Mel Gibson is an antisemite but i’m not a huge fan of Jesus. i mean i’m technically baptized as Christian so it’s not like i’m offended by Jesus but also not inspired by him either …